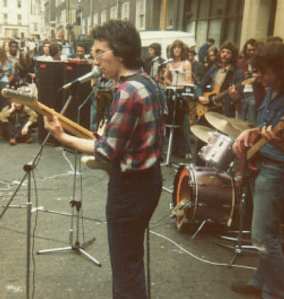 Singer-songwriter Elvis Costello was recently the subject of a BBC Four documentary.

Having recorded 33 albums and had many hit songs he is widely regarded as one of the most versatile and intelligent performers of his generation.

Costello played one of his first gigs leading the band Flip City at the Fitzrovia Festival Saturday 1 June 1974.

He was then known as Declan P MacManus and was joined by four musicians: Michael J (Mich) Kent on Bass guitar and vocals, Malcolm Dennis on drums, Steve Hazlehurst on guitar, and Richard (Dickie) Faulkner on congas and vocals.

It was one of many gigs that Flip City played around 1974 and 1975 on the London ‘pub-rock’ circuit.

Picture and information from Flip City: The True Story originally published at http://myweb.tiscali.co.uk/flipcity/flipcity.htm and retrieved via the Internet Archive Wayback Machine. A taste of what you might have heard from Flip City — Elvis Costello & Flip City: Demos (1975) — can be found on Music Ruined My Life.